What does this have to do with us?

An friend of mine, I call him Ralf here, gets fever, dry cough, at times chills. The typical symptoms.
As expected: SARS-CoV-2 positive.

That was two weeks ago. My friend is doing fine now. He has no more symptoms.
Ralf’s wife and his two children, one of them an infant, did not get any symptoms, but were tested too. Result: negative.
“That my family did not catch the disease from me seems not really possible, if one is to believe the epidemiologists and their descriptions of the infectivity of Corona,” Ralf wonders.

Another friend of mine, here called Klaus, had already been tested Corona-positive about four weeks ago. Because he felt healthy and wanted to end his quarantine, he had himself tested for the second time a few days ago – again positive, so still. This is also atypical, because it does not fit the alleged maximum duration of 14 days during which infected persons remain contagious.

I know this story is complicated enough, but it goes even further: Klaus knows on which evening he got infected. A colleague of his got infected at the same event, probably from the same person. Four weeks ago, this colleague developed mild symptoms which at first seemed to go away, but which suddenly worsened to such an extent that an emergency hospitalisation became necessary. He had previously infected his father. Both are now in intensive care at the same time. The father is given artificial respiration through a tracheotomy. The condition of both is said to be critical.

The microscopic enemy is getting closer.

When did I first think that the new corona virus could affect me? Probably as early as December 2019, but the thought remained nebulous at the time – even as the bad news from China began to accumulate. Then the horrible news from Italy came thick and fast. I know people who were affected and heard about their horror experiences. Again the question: What does this have to do with me? The answer: unclear.

A dispute has arisen between the Robert Koch Institute (RKI) and the Federal Association of German Pathologists. The RKI had advised against autopsies of so-called corona deaths. The Pathologists vehemently objected. “From the autopsies” of the dead “we can learn how to treat the living better. For this we need to know: What was essentially responsible for the death? We’re talking about Covid-19 deaths, and that’s not entirely wrong. But Covid may be bringing forward a death that’s already looming for other reasons.”
The current practice for determining the cause of death is very simple: if a person is corona-positive and dies, he is considered a Covid death. Whatever he actually died of.

What is more dangerous, I too asked myself just a week ago, Covid-19 or the media excitement about it? I do not know the answer today, except that both are evidently very unhealthy. This can be seen in the following two charts (The Economist, April 4th – 10th, page 73): 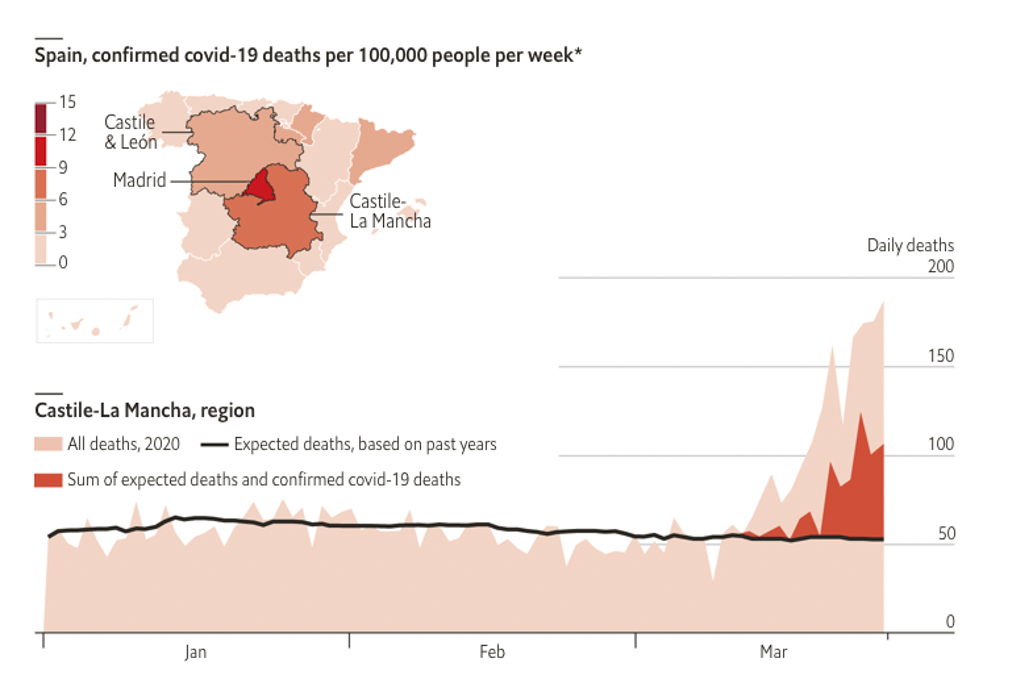 Here the rate for the same period in a small town in the Bergamo region: 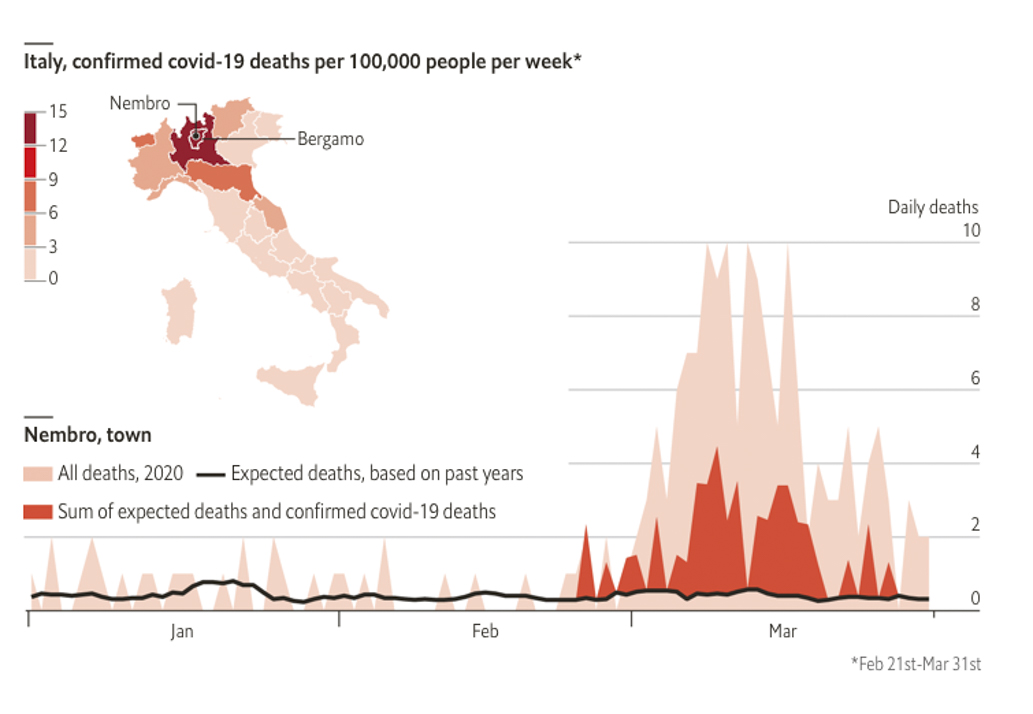 The first chart shows the mortality rate in the greater Madrid area for the first quarter of this year. The second chart shows the mortality rate for the same period in a small town in the region of Bergamo in northern Italy. The black line shows the expected mortality rate for 2020 – calculated from the average deaths of the previous years in the period from the beginning of the year to the end of March. The actual deaths are shown as a light pink curve. This curve runs sometimes above and sometimes below the expected mortality rate, but always close to it. Of course there are deviations, death doesn’t hold up to expectations.

This changes with the arrival of Corona. Within a few days the death rate in the Madrid area triples (including Covid-19 cases, dark pink). In the small Italian town of Nembro it multiplies even more. Around 11,500 inhabitants – struck by lightning as if out of the blue.

My life is changing rapidly at the moment. But not for the worse. On the contrary, and as strange as it sounds: I’m enjoying my days in a calmed Berlin. In the meantime people are even smiling more. Do they and I lack imagination to anticipate the upcoming misery? Apparently.
Easter Sunday blessed Berlin with bright sunshine and summery 24 degrees. I went to the Tempelhofer Feld to do some sports, keeping my distance to other visitors. The majority behaved as if there was no reason to worry. People sunbathed close to each other. Are they possibly right with this clueless attitude?

What you can’t see, hear, smell, taste or touch seems abstract. Until you suddenly can. And then you’re out of your mind.

“That’s the way I feel now“, a friend wrote me from New York.

What should I answer him from afar? Is there anything I can say to calm him down?
That this is a fateful turn of events? That the world is reconsidering now? That change always comes with a price? That one should not rebel against the possibility of one’s own death? That I’m not afraid of death? That it is a blessing to be part of overdue change and that spring 2020 marks the beginning of that change? That I enjoy every day of it? That I experience these days more intensely and consciously than the months before? That I feel in harmony with myself as for how long not?

I finally told him all this and more on the phone. I heard him crying on the other end. And felt miserable.

What do the illustrated graphics say about Covid-19? Well, not that the disease is as harmless as many would like. Nor does it mean that you can go back to business as usual as if nothing had happened. That’s a good thing. And hopefully it will stay that way, even if it turns out that it was mainly the viral excitement that was responsible for the bottleneck situations in the hospitals and high mortality rates as a result.