What next? A review

“A lot of people are nervous. A majority of them is even scared.” These are the sentences that I hear from psychotherapists and medical professionals during the last days.
We have dramatic disease rates in Europe. Lockdown in New York. What kind of wave is rolling towards us?

Some experts in virology and epidemiology (i.a. Dr. Sucharit Bhakdi, Professor of microbiology and infection epidemiology in Mainz) believe that we are increasingly suffering from draconian government measures. The worldwide reactions to Corona are exaggerated – if not undully.

Mathias Beiglböck, Philipp Grohs, Joachim Hermisson, Magnus Nordborg and Walter Schachermayer, almost all mathematicians at the University of Vienna, share an opposite view. They have recalculated the Covid-19 infection, morbidity and fatality rates and issued a statement on 30.3.2020 via the Austrian government website. The professors came to the following conclusion: If the corona epidemic continues to spread at an exponential rate, i.e. if one infected person infects at least one other person, the collapse of the Austrian health care system with tens of thousands of deaths is most likely to occur. The goal should be to reduce the infection rate significantly. “This will probably require way more stringent measures rather than those that currently in force.” Otherwise a shutdown of the Austrian health care system is to be expected in mid-April. However, the developments in the USA, especially in New York, give rise to the fear that the situation in some places will deteriorate even more rapidly.

How dangerous is Covid-19, the disease caused by an infection with the novel coronavirus Sars-CoV-2 really?

Reliable evidence is provided by epidemiological data from the cruise liner “Diamond Princess“. All of 3,711 passengers on board have ben tested. 697 were tested as corona-positive. 328 of those who were tested positive showed no symptoms. 2,071 passengers were between 0 and 69 years old. About 50 of them were tested positive, but had no symptoms. About 180 had symptoms. No one in this group died from Covid-19. 1,231 passengers were 70 and older. Seven of them died.
A cruise ship is a closed population. You live in a confined space. Stewarts, bartenders and other members of the crew are so-called superspreaders. If they are (unknowingly) infected, they can very quickly infect many other people. Despite the cramped conditions, only about 20% of the passengers were infected. This, however, in a very short time. About a half of the infected passengers showed no symptoms. The average age on the ship was 58 years. 33% were over 70, including the seven who died.

Prof. Dr. med. Pietro Vernazza, Chief Physician for Infectiology at the Swiss Cantonal Hospital St. Gallen sees the governmental measures in most European countries similarly critical as the already mentioned Prof. Bhakdi from Mainz. The physician refers to a publication in the magazine Science. Epidemiologist Ruiyun Li (University of Beijing, Imperial College London) and colleagues had re-evaluated the medical emergency in China due to corona. The conclusion:
Around 85% (82-90%) of all infections occurred without anyone noticing the infection.
About 55% of those who were unnoticed have infected other people.

Vernazza wonders how this publication could “pass us by almost unnoticed” in the current agitation: “Actually, we have been suspecting this for a long time. Otherwise it would not have been possible to explain why the infection figures in China have dropped to zero after a few weeks. Because this cannot be explained with an immunity rate of less than 1% of the population (less than 100,000 people out of about 10 million have fallen ill in Wuhan). It wouldn’t even be surprising if further researches put the rate of silent infections even higher. This new and not surprising finding must quickly lead to an evidence-based correction of our measures.“
The Swiss expert demands: “Finally inform the population and speak plainly. This infection is mild for young people. Fear is not a good advisor. Most people have the idea of a terribly dangerous disease. Yes, it is true: In Italy, about one person in ten diagnosed dies. But as we now know from this publication in science, that’s more likely one in 1,000 infected people.”

Scientists (on the subject of virology / epidemiology) are divided on questioning the threat of corona. There is no doubt that economic experts are in agreement on the gravity of the matter.
But why do I write about it in my blog?

Despite certain historical issues, Chinese go on holiday in Japan in large numbers. This year in January 925,000 came to visit. Even in February there were 89,000 visitors from China in Japan. There is no evaluation how many of them were already infected. With an average age of 48.4, Japan’s population has the highest proportion of senior citizens (i.e. the risk group) in the world. Which is important in this context because (as figures from the cruise ship confirm) Covid-19 tends to spare the young and affect the elderly.
Why are the effects of the current pandemic in Japan (at least so far) less serious then?
Sure, Premier Abe has closed schools and cancelled events to slow down the spread. But restaurants and shops remained open. A much gentler response than in Europe.
So why haven’t many more people in Japan contracted a Covid-19-infection? What saved the Japanese health system from collapsing?
One reason is probably that little corona-testing has been done in Japan so far (with hope to save the Olympics – which didn’t work). But an important part of the answer can be seen in the following photo (a screenshot from the internet): 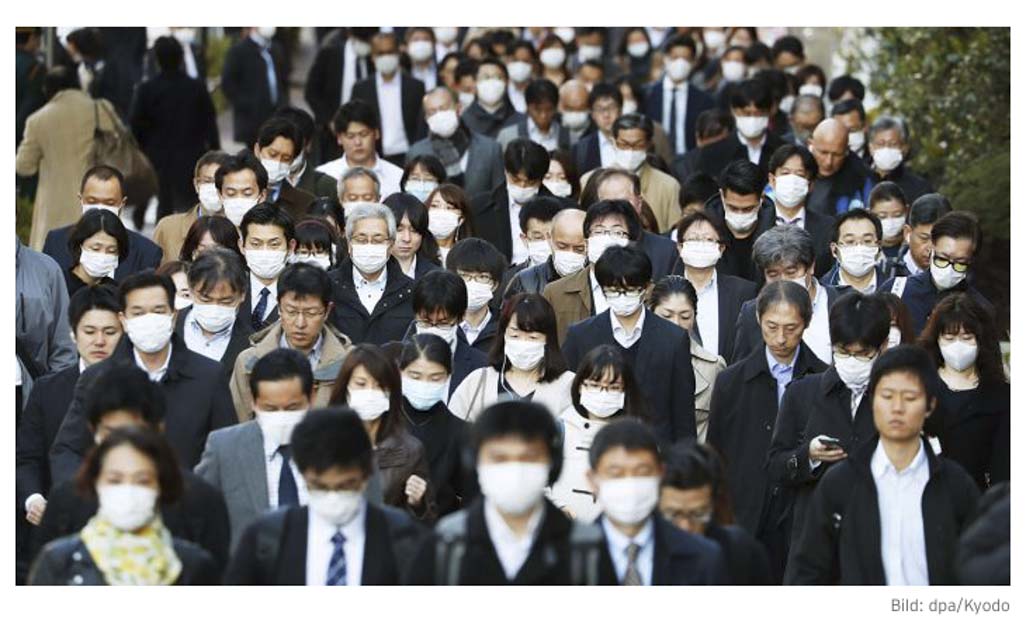 People who wear masks to protect other people from possible infection. An everyday picture during the winter months in the metropolises of Japan. As soon as a wave of influenza threatens, many people leave their homes only wearing a mask. Because they protect others, they protect themselves.

Another photo in this context. Taken at Buckingham Palace on 11.3.2020. Prime Minister Boris Johnson’s handshake and bow to the Queen. Her birthday is coming up. She will be 94 years old. Johnson, who in the meantime has contracted Covid-19, now governs from quarantine. The Queen should be fine. She’s weathered worse than this. 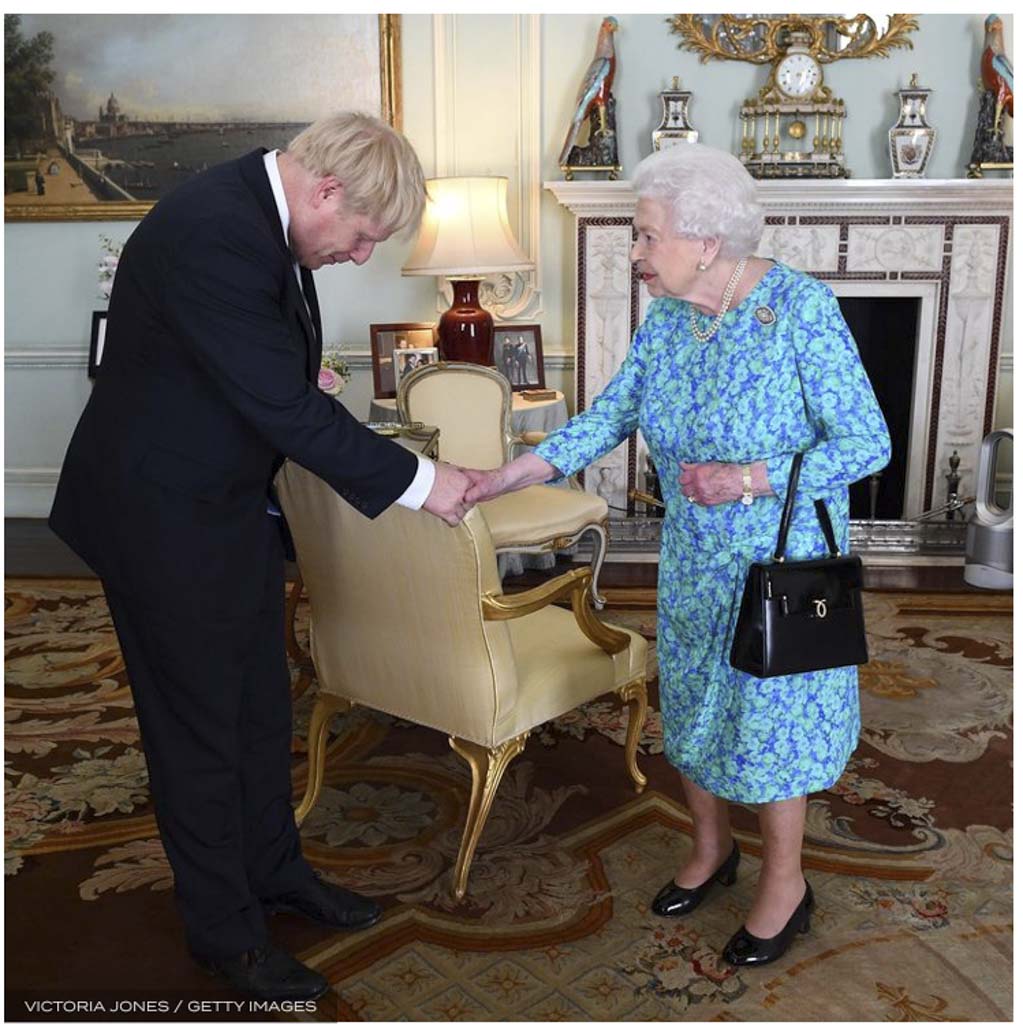 Boris Johnson’s handshake and bow to the Queen, 11.3.2020, Screenshot from the BBC-News-page

But all the current ignorance of power is, in my opinion, reflected in this photo. As a reminder: Covid-19 endangers old people more than young ones, especially very old people.
Despite contradictory news on the scale of the corona epidemic and appropriate crisis management: young people are invited to protect all old people as good as they can.

So first of all: Put on a protective mask, dear people, before you step out into the street! If you don’t have a mask, wrap a scarf or cloth around your nose and mouth. Something is still better than nothing!
Don’t run into other people in public places, for example in the supermarket or on the bus or subway! Avoid other people, no matter what age!
Observe the hygiene rules required by health authorities. This cannot be wrong in any case.

Indeed, I believe that the growing mindfulness creates a new way of living together. For now social distancing is necessary. As a result we will be much more ready for a new time of rapprochement and closeness.